Machine learning in AFL Part II - It's all about percentages

TL/DR: I made a machine learning algorithm to predict AFL matches before they started. When I simulated my results on 2017 matches and used it for betting, I managed to get a net positive return on my investments.

A few months ago I posted an article introducing the concept of machine learning in AFL. You can find that article here [https://www.aflgains.com/2018/04/25/machine-learning-in-afl-part-i-does-the-free-kick-differential-really-matter/]. I presented some use cases about where it could be practically applied, including injury prevention and management, drafting, in-game strategy and strategic trading. These use-cases were all geared toward benefiting the club. There is, however, one area that machine learning excels at that would benefit punters and tippers - game prediction: predicting the outcome of a match before it has started. In this article, I will focus on how I built a machine learning model to do exactly that.

This article is structured as follows: first I will briefly describe supervised machine learning. Next I’ll move into how I created the model to predict AFL matches- I’ll discuss the data, features and methodology that I used. I’ll then discuss the final results including accuracy, potential improvements and, most importantly, how to use it to make money.

Supervised machine learning is probably best understood in an AFL context with a simple example. Suppose we wanted to predict the outcome of a particular match. We don’t know anything about AFL, but we have a friend that has presented us with some historical matches and we have found a pattern that the home team tends to win more often than the away team. So we pick the home team.

What we have just done is created a very simple “model” (a mental model in this case) to predict the outcome of a match based on previous experience. In our data we have only used one data “feature” - the home/away status of the team. In fact, using this one feature, we would have an expected accuracy of 58% because the home team wins 58% of the time.

At this point it is useful to define a few terms:

Now, we want to improve our prediction accuracy by introducing more features. This means we start to ask other questions about the teams and the conditions. For example, what is the weather like? Who are the key players that are included in each squad? What are the respective ladder rankings? What are the historical outcomes between the two teams?

This is where machine learning will help us. Basically it is a mathematical technique that can automatically map the relationship between features and predictions using historical observations. It will “learn” the statistical trade-offs between contested possession, homeground advantage and any other relevant features to help use make a prediction about the game outcome.

What was the goal?

I tried to predict the outcomes of the 198 matches played in the 2017 AFL Home/Away season using data only available on AFLTables.com.

A little bit about the AFL 2017 season - this season is notorious for being one of the most even in history. In fact several posts were written about this on Reddit [https://www.reddit.com/r/AFL/comments/6ls48y/this_is_the_most_even_season_since_1998/] and some articles even were written in the paper [https://www.theaustralian.com.au/sport/afl/afl-2017-most-even-comp-since-expansion/news-story/b3a15b2ad17fe9727244c19aecbc01d2]. This means its one of the most difficult to predict.

What data was used?

The data used for the study was web-scraped from AFLTables.com and contained all in game player information from 2003-2017. This constitutes approximately 2700 individual matches and contains data on key player statistics and venue of game played.

What features were used?

The features (information) that I used to try to predict matches can be classified into 6 broad categories. For each game (combination of home and away team), we can calculate difference in team ranking, form line, venue experience, key game statistics, player ranking and line up and fatigue.

This was simply the difference in the win-loss record over the last 5 rounds.

These are the differences in in-game statistics between the home and away team, averaged over the last 5 rounds. These include: win loss form, score, percentage, kicks, handballs, contested possession, tackles, hit outs, rebound 50’s, inside 50s; free-kicks, clangers, marks inside 50’s, goal assists, bounces, time-on-ground.

Along with differences in the mean, the difference in the variance variance was also taken into account.

I also looked into team line-up before the match. For each match, I calculated the top performer for goals, clearances, goal assists, tackles, contested marks, and rebound 50s for the last 5 matches for both the home and away and determined whether or not that player was playing in the current match.

I modeled a fatigue factor as which third of the season we are in (1-8 = Beginning, 9-16 = Middle, 17-23 = end). I also had a feature in there indicating whether it was Round 1 or not so that the machine could learn any differences between round 1 predictions and the rest of the season.

How did I assess the model?

What was the model?

The data was partitioned into a validate/train set (Season 2016 and below) and a hold-out set (being 2017 season).

To generate confidence intervals in the predictions I trained 99 more models on bootstrapped versions of the data.

66.7% sounds low, but is it really that low? To benchmark these results, I downloaded some published tipping results from “experts” (after the H/A season had finished) from the herald sun. I also calculated the accuracy of what you would have achieved had you followed other stats related methods including the betting odds (http://www.aussportsbetting.com/data/historical-afl-results-and-odds-data/), the Swinburne Computer (https://www.swinburne.edu.au/footy-tips/2017-footy-tips/) and simply tipping the home-team.

The model comes equal third, only behind Chris Cavanagh and Trent Cotchin. It out performs, most experts, the Swinburne computer and outperforms betting odds. Special shoutout to Scott Pendlebury, Marcus Bontempelli, James Hird and Mick Malthouse who notibly did worse than simply tipping the home-team.(this is potentially due to team bias for the players…).

What is important to predict match outcomes? 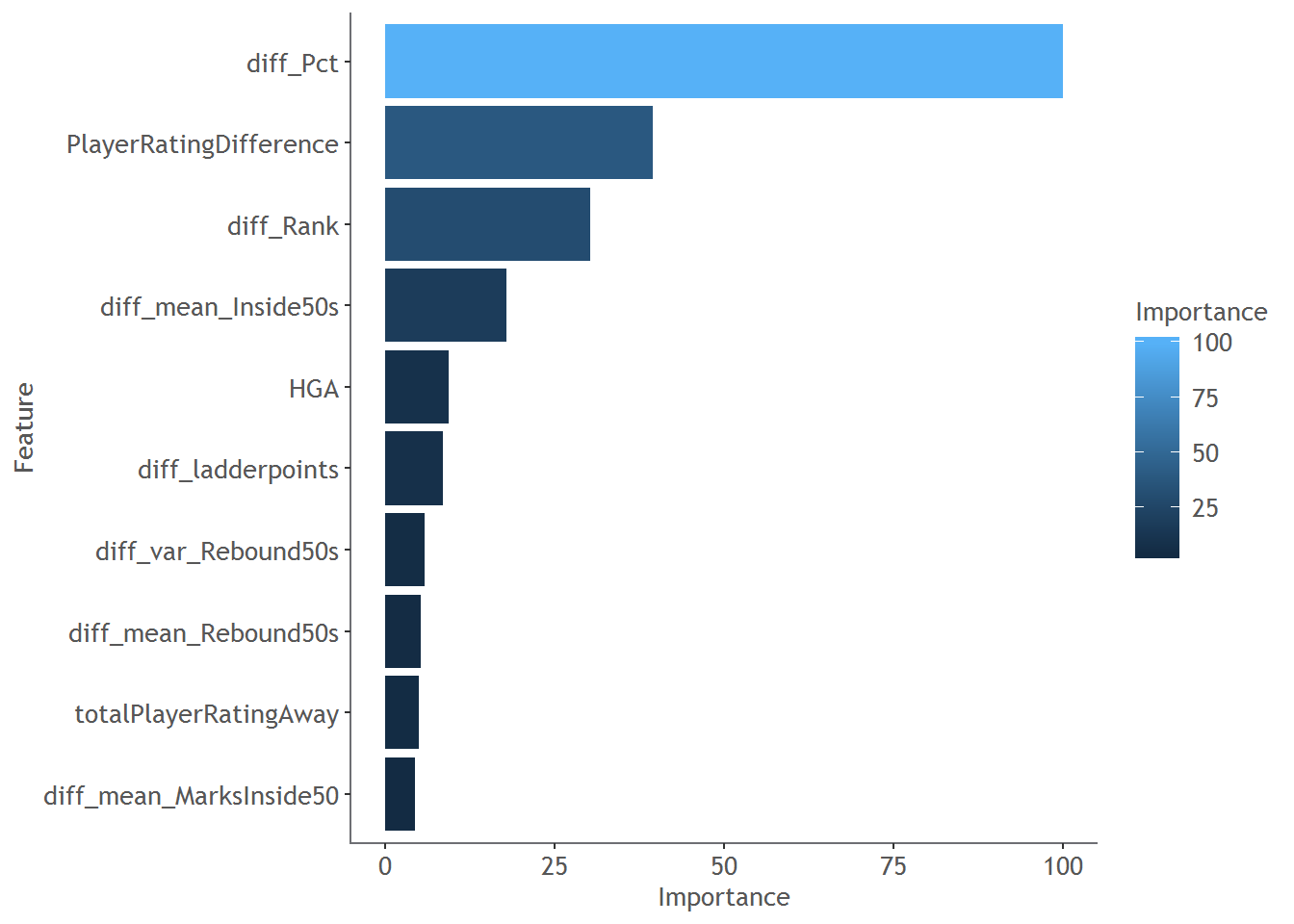 Here are the relative ranking of the top 10 features. Surprisingly, the largest driver of a win is actually the difference in the 5-game rolling percentage. The other features that are important are ones you would expect: player performance, ranking and home-ground advantage. Of the actual in-game statistics that make a difference, inside50’s and marks inside 50s appear to be the most predictive.

Using the model for betting

And now for the most important question - could I have used this model to make money on the betting markets?

The short answer is … I would have, but this may just be luck. 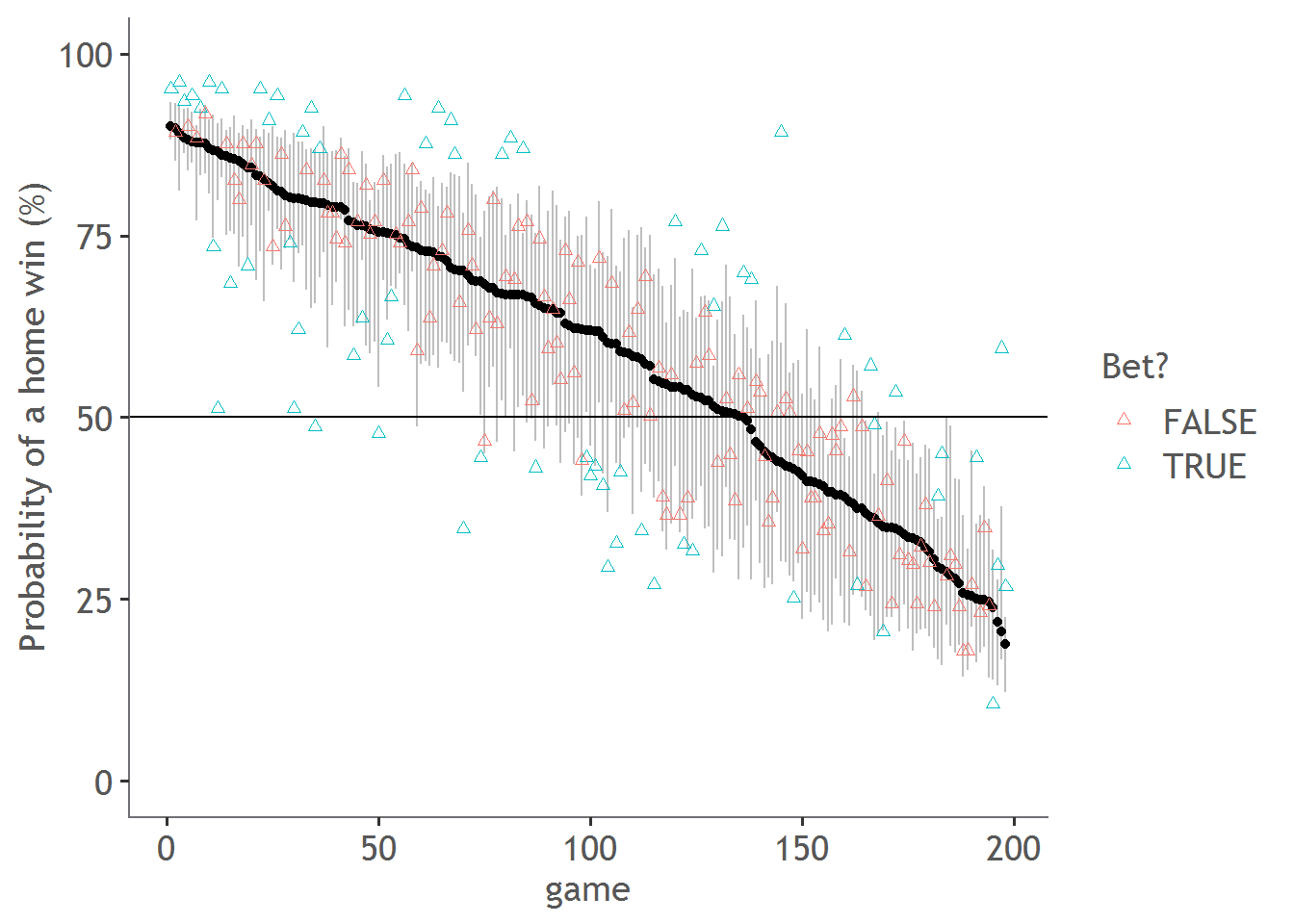 To put it short, red triangles are games where the predicted probability is similar to what our model estimates because they fall within the confidence bands. Blue triangles are those that we think have been sufficiently miss-predicted and therefore we spot an opportunity to place a bet. 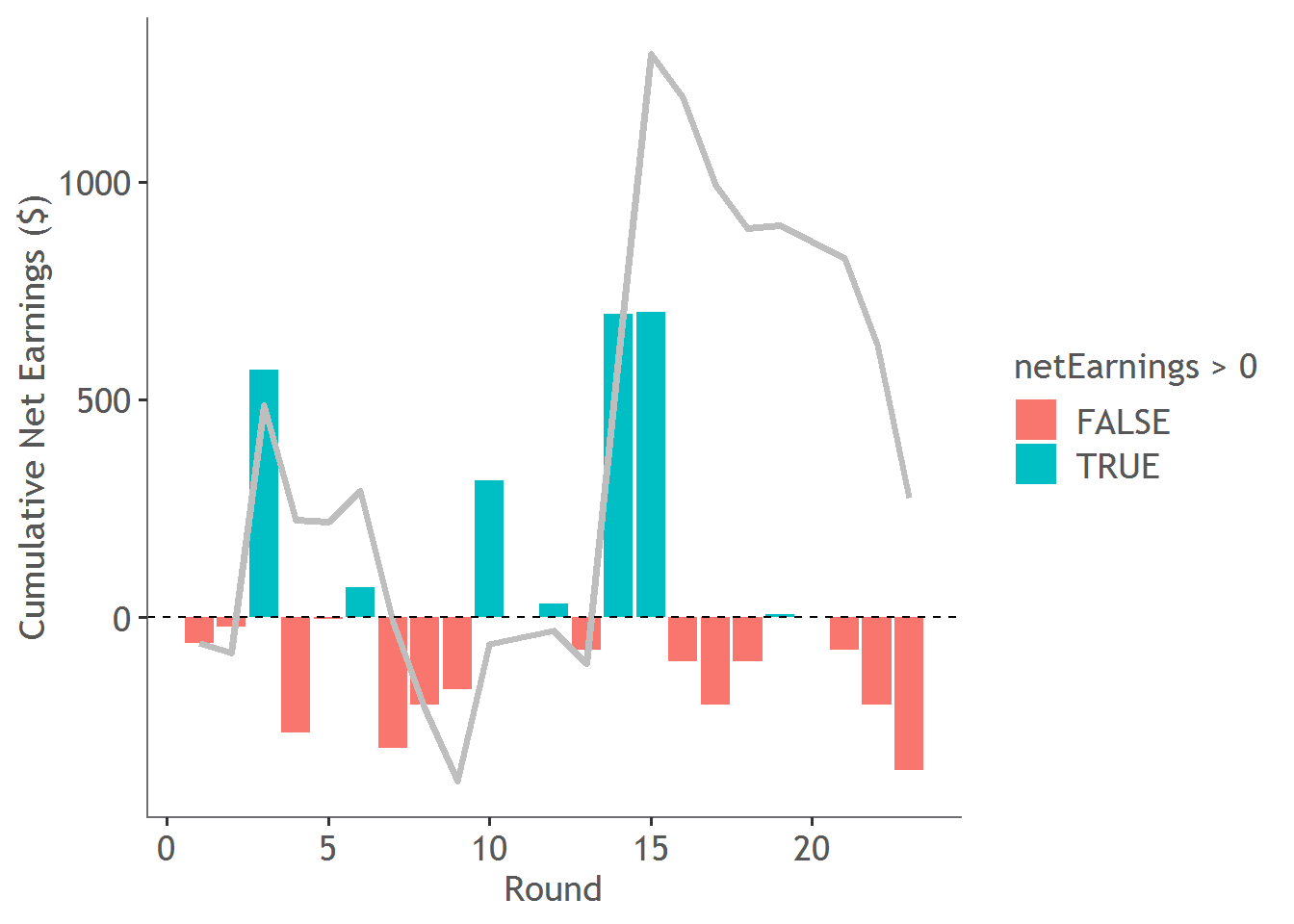 Can we do any better?

We can also visualise the winnings on the same graph as before - here I’ve placed an ‘X’ for games I lost money and a green square for games I won money. The size of the green square is proportional to the amount I won. 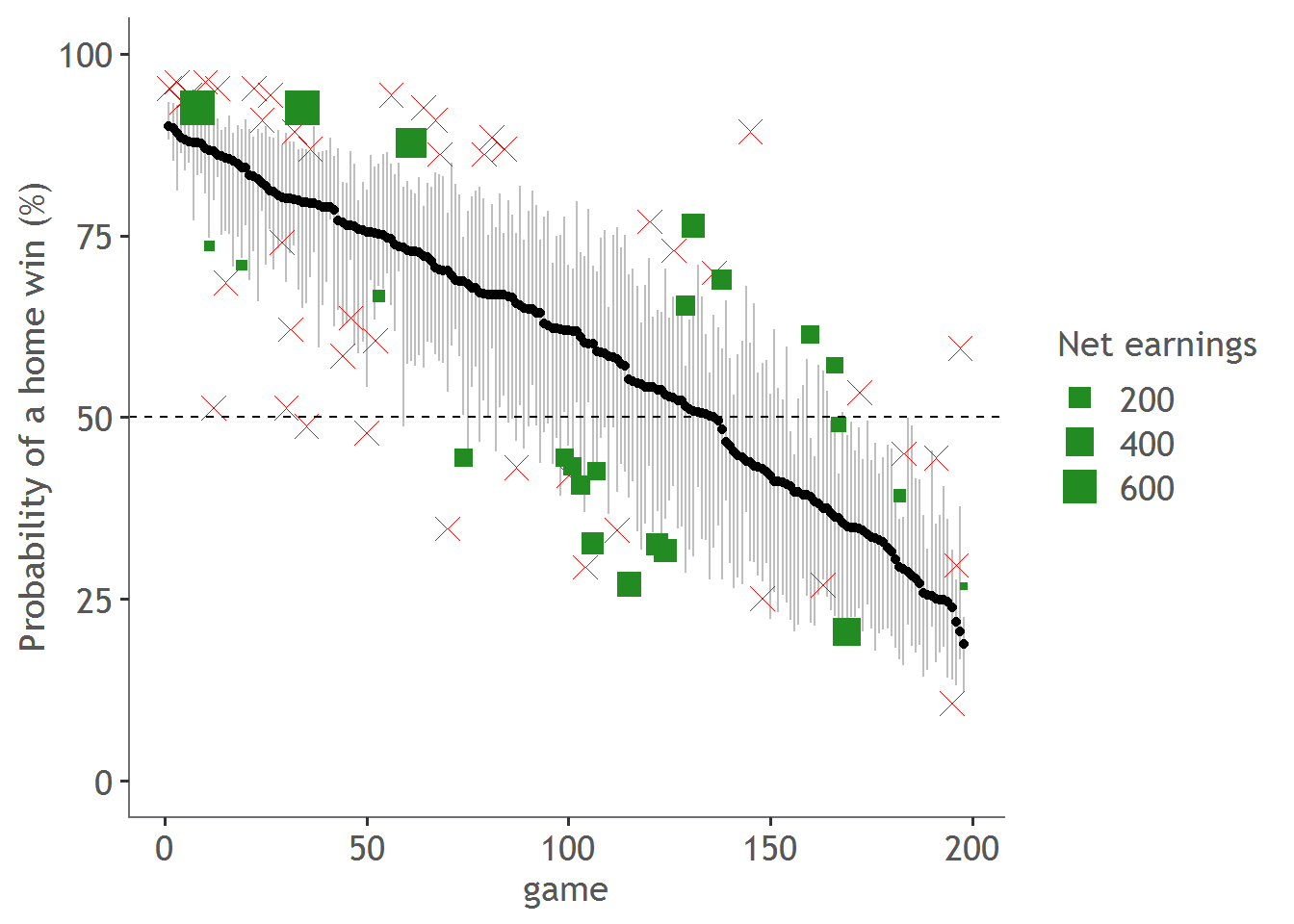 This visualise shows something interesting…there appears to be a 4 separate clusters of points, one in each corner of the graph. Here is the graph again with those clusters shown: 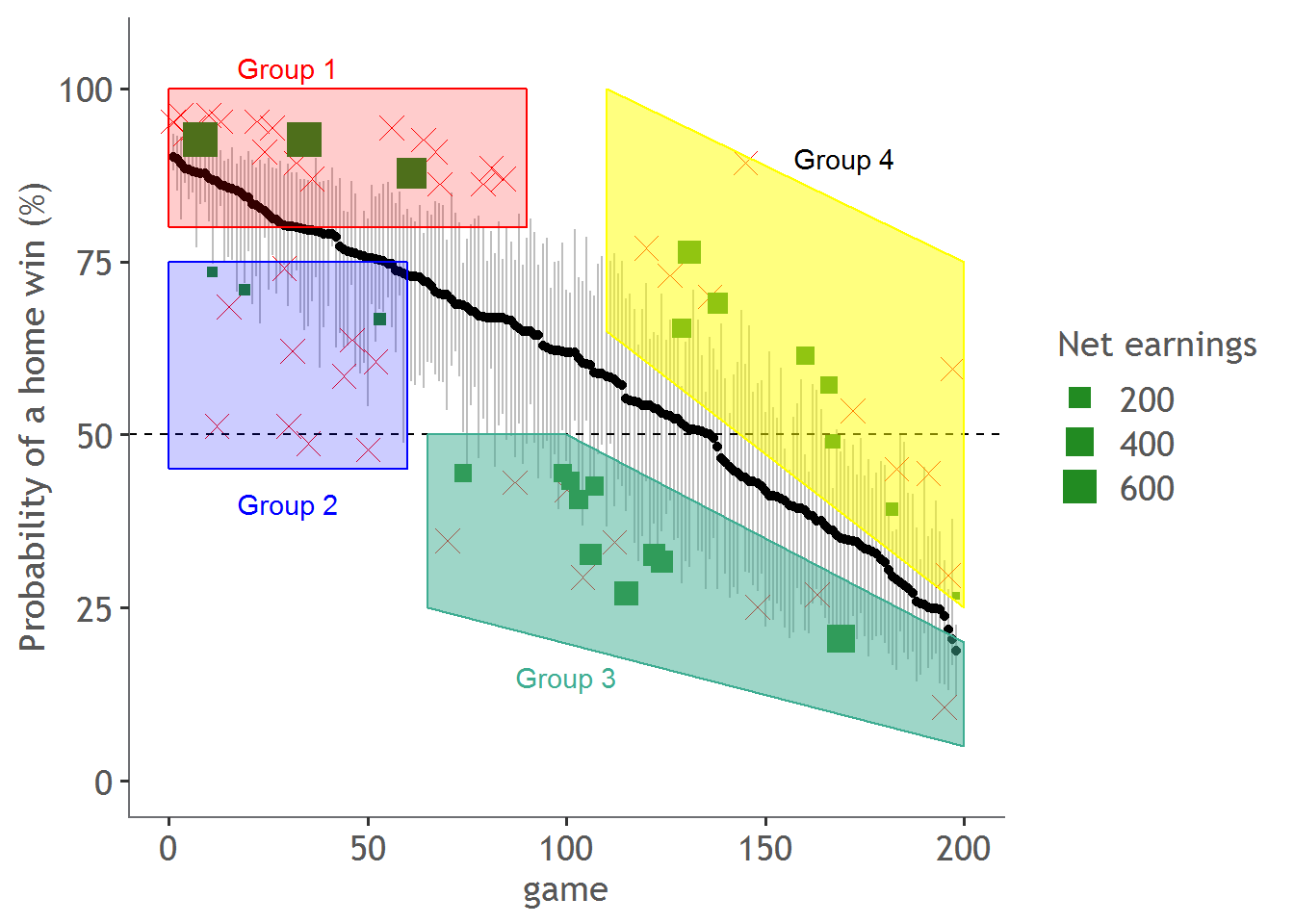 If we analyse each of these groups for their expected winning probabilities (as per the odds), the actual winning percentages and total net earnings we see something very interesting.

Group 1 and 4 tend to have very low net earnings. For these groups we are winning as much as we are losing, so our model and the Odds are at a stalemate. According to our model, the Odds have over valued the home team, but our model doesn’t consistently identify this opportunity correctly to create a positive net yield.

Conversely, (and rather strangely) there is Group 2, where both the model and the Odds do a terrible job at predicting the home win. In fact, the expected winning percentage (according to the Odds) for Group 2 is 60% compared with the actual winning percentage of 23%!. The reason why we lose money in this case is that while both models do a terrible job, the odds are slightly less terrible.

Finally, let’s look at group 3. Group 3 has a gigantic net earnings - over 1000 dollars won on 1800 dollars staked (100 dollars per game)- that’s around a 60% return. I think that what we have identified is a potential inefficiency in the market. Put simply, for these games, the TAB consistently tells us that the home team will lose, whereas the model tells us that its more even than that. And the model is right more often than not. Basically for these games, the Odds is undervaluing the effect of home-ground-advantage.

In the future, based on these results, it would seem wise to only try and bet on games that fall into the green classification. Theoretically, we should be able to classify the games as green or before the match even starts, so it does seem like a possible and implementable strategy.

Also, for those of you that want a full list of the games that I bet on (or if you want to do some of your own analysis), I’ve made a table of the matches here.

So did I unlock some magic secret to guarantee a profit off of AFL? The answer is maybe, but it definitely needs to be tested more. I concede that it’s likely that I’ve simply identified matches which look predictable (but are actually highly unpredictable, for a variety of reasons) and got lucky. I also may have spotted a pattern for 2017 that may not exists going forward. However, I don’t think that the key takeaway here is that you can use machine learning to guarantee money. I think that it’s that you can make a model that’s almost as good as an industry standard using random pieces of information from the internet, which I think is pretty cool.

If we add more matches, then we have more historical outcomes to learn from and generalise, so this should theoretically help us. Unfortunately I only had access to full in-game statistics from about 2003 because this is where AFLTables starts to record all statistics.

I highly suspect that the AFL records information other than that presented on AFLTables.com and even presented to the public. These might other bits of information that are highly predictive of winning or losing.

Another avenue that I didn’t explore was to add more publicly available sources and better player data. This might include things like weather (raining or not, temperature etc.), and fatigue / travel factors (like how many km you have to travel to a venue), injury rates, dream team scores, official player ratings etc.

I used a boost and tried some others (logistic regression, NN, random forest) but there might be other machine learning techniques that might do better.

Also, the cross validation method might not be the best. There is an argument to treat the matches as a times series so in your validation you only use matches from before hand to predict upcoming matches. I’m not so certain this is the case, and the results on the hold-out set prove that I’m barely over-fitting.

Another improvement would be to optimize for Log Loss rather than accuracy. At the moment, the model’s log Loss was approximately 0.65, where as the log Loss of the Odds were 0.61.

Lastly, while I am predicting a binary outcome, it might to predict the margin. The theory is that margin prediction would actually provide feedback about the strength of how wrong, or how right you were. I’m not 100% on this because if the margin is 5, and you predict -5 (a loss), this is the same error as if you predict 15 (a win). But predicting 15 is objectively better than predicting -5.

While I know a little bit about football, I’m far from an expert. A true expert opinion about which features drive match outcomes would be invaluable to help improve the prediction accuracy of the model.